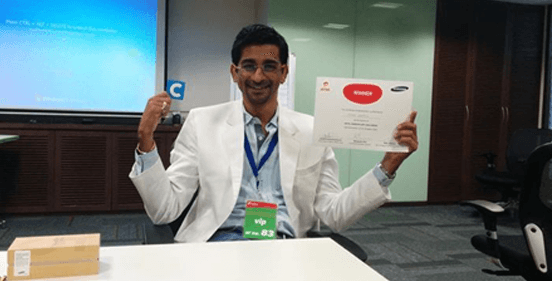 It’s a moment of pride for us at Cumulations to see our client winning the prestigious Airtel-Singtel-Samsung App challenge.

We have involved in early stages of Catch it’s development where we discussed on possible use cases of the app. We were brainstorming with Imran (Catch it founder/client) on different issues concerning hosting environment to choose, UX elements to decide on.

Imran was particularly keen on UI so much so that, we changed the complete app UI during the project only to welcome what turned to be elegant UI in the end. This was done by a brilliant designer who had previously worked at nimbus (I guess !). UI had the lot of small but significant animations, which needed significant coding than what we had previously imagined!

We minimized the server complexity by choosing Parse.com and were able to accommodate different use cases of the app. Later when the use cases expanded to include data loading, filtering parse scaled for the need just fine.

There was one problem that we faced with Parse though, which was critical to Catch it. In Catch it App, User throws a file to his fellow catchers. Now for some reason Parse did not provide us with file upload progress percentage properly.

File upload percentage updates from parse were very abrupt and hence the File uploading experience was broken in parse. (An issue regarding this in parse is pending for more than a year now)

At this Juncture Cumulations, provided a Heroku (Platform As A Service) supported server, to only manage the File uploading process. We provided a servlet based multi-part file uploading using Java. We were able to interact with parse from core java environment.

We separated the File uploading mechanism while keeping everything else the same under the jurisdiction of Parse. Now we were able to get the upload percentage properly and we went on to build animation for file upload, which makes it more intuitive for users now!

Finally, it was great working with Imran! Our old friend Heroku.com came helping when we were stuck in the middle! Even today, our Heroku deployment runs fine in Catch it app! The good thing about Heroku was It didn’t need a single dollar for a client to shell out for maintenance! It runs automatically for free!!

As of now Catch it App is in its Close group launch! We are excited to see it out there soon!